Cirebon is a heritage city of the heyday of the Islamic Kingdom in Indonesia, which is commonly known as the City of Guardians and is one of the strategic regions of entry of immigrants from various nations and cultures. Although there are differences, harmonious living together is still established, as evidenced by the existence of a Chinatown in the Kanoman Market which is located near the Kasepuhan Palace.

To support the spirit of unity and unity in Cirebon, Pacific Paint provides a touch of picturesque beauty by inaugurating “Pecinan Warna Warni” (means the Colourful Chinatown) in the Chinatown Area, Kanoman Market which is a representation of various cultural, ethnic and nation. The Kanoman Market Chinatown area has the potential to be one of the main attractions of visitors who are dear if not guarded because, in addition to being an economic centre, this market is also part of the history of the Indonesian nation.

Pacific Paint through its Corporate Social Responsibility (CSR) program collaborates with the Kanoman Traders Forum in revitalising the Chinatown area for painting 200 shops using Metrolite Weatherseal wall paint, replacing 67 tents and 16 canopies with exciting colours depicting ethnic diversity, culture and religion but still side by side in harmony and harmony. A cheerful smile can also be seen from the faces of shop owners and sellers because the place to make a living now becomes more colourful so that it fosters a new spirit in welcoming the future.

Pacific Paint has repainted the outer appearance of the Kasepuhan Palace and also create information boards.

Pacific Paint consistently applies its vision and mission to colour Indonesia also has a long history of being a pioneer of paint factories in Indonesia since 1943. A similarity in its historical value, Pacific Paint in addition to inaugurating the Colorful Chinatown also repaints the Kasepuhan Palace as well as information boards history around the yard to the palace. Occupying an area of ​​25 hectares, visitors can find information about the function and history of buildings and rooms in the palace area. In this painting process, Pacific Paint works with three Cirebon Sultanates, including the Kasepuhan Sultanate, Kanoman Sultanate and Kacirebonan Sultanate.

Many historical places within the palace that can be used as locations to capture moments with family and relatives, including backgrounds of ancient objects or relics of the palace which show a blend of elements of various religions and cultures, and the Singa Barong carriage which is the first sophisticated old carriage made in Indonesia. 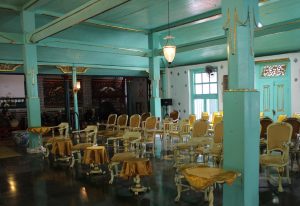 The inauguration of Pecinan Warna Warni and the re-painting of the Kasepuhan Palace by Pacific Paint aims to preserve the culture and history of the nation in Cirebon and increase the interest of tourists both locally and internationally.

Make historical sites one of your tourist destinations.
Preserve Indonesian culture and history.